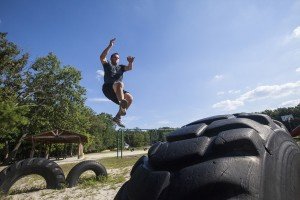 Tech. Sgt. Justin B. Gielski jumps from one tire to another while training to compete on the TV show “American Ninja Warrior” at a playground near his home in Medford, N.J., Aug. 21, 2015. Gielski placed fifth in the all-military city final on the TV show and advanced to the finals in Las Vegas. Gielski is a loadmaster with the 150th Special Operations Squadron, 108th Wing, New Jersey Air National Guard. (U.S. Air National Guard photo by Master Sgt. Mark C. Olsen/Released)