Abstract Influence of training and task difficulty in tennis

The purpose of our study is to determine what characterise the efficiency of a player in table tennis. The first term which comes in mind is ‘complexity’: complexity in the management of the ball-bat contact (Bootsma & Van Wieringen, 1990), complexity in the effort management and complexity on the mental load (Baron et al., 1992). In other words, the complexity of the table tennis activity lies in the need for intercepting and returning balls as fast and as precise as possible, while ensuring varied and fast displacements, choosing the best strategy to win the rally.

The purpose of our study is to determine what characterise the efficiency of a player in table tennis. The first term which comes in mind is ‘complexity’: complexity in the management of the ball-bat contact (Bootsma & Van Wieringen, 1990), complexity in the effort management and complexity on the mental load (Baron et al., 1992). In other words, the complexity of the table tennis activity lies in the need for intercepting and returning balls as fast and as precise as possible, while ensuring varied and fast displacements, choosing the best strategy to win the rally. An analysis of the table tennis activity in terms of motor skill organization points out that the player is confronted with an activity of trajectory perception and of fine movement execution to control the ball-bat contact, the movement velocity, the movement accuracy and the drive direction. These stages (perception, decision and action) had to be accomplished under an important time constraint (200 ms) and following the tactical organization of the strokes. As evoked, the informational constraints are high (quantity of information to be treated, perceptual uncertainty and time pressure, precision necessary for the execution) and led certain authors to define this activity as a bio-informational sport activity (Ripoll, 1989). Table tennis is also characterized by a rapid succession of short-term maximal or sub maximal efforts and short recovery phases. From a physiological point of view Lundin (1973) and Orfeuil (1982) characterized table tennis as an aerobic activity with an occasional anaerobic implication. Consequently, a good aerobic capacity seems to be an essential factor to ensure the various and fast displacements needed during a rally. Parallelly to the definition reported above, Ripoll (1989) defined table tennis as a bio-energetic sport activity. To go further into the analysis of the table tennis ability both these aspects, motor control and physiology, must be taken into account. Motor skill organisation depends on the physical preparation and physical preparation sustain motor skill efficacy. In activities where motor control and physiological involvement play a fundamental role, Durand (1992) use the expression “non optimal solicitation” to qualifies the conflict between efficacy and energetic solicitation. To characterize the efficiency of table tennis players we choose to look at the training effects both on performance and physiological demand when the intensity and the difficulty of the task vary. We supposed that a specific training program allow players to gain in efficiency, that is, to increase their performance and to reduce the energetic demand. However, whatever the training effects, we hypothesized that efficiency remains influenced by task difficulty, evidencing a negative correlation between these two parameters. In order to analyze at the same time the performance and the physiological involvement of participants in the task execution we retained two indicators: the percentage of success, strictly linked to the capacity to organize movements to attain a imposed goal, and the heart rate, that is considered a good and easy-to-use indicator of energetic involvement (Astrand & Ryhming, 1954).

2.1 Participants Eleven students from the Faculty of Sport Science volunteered to participate in this study. They were all right-handed and they were considered as novices, having only 20 hours of trained practice behind them. Anthropometric characteristics such as age (23 ± 3.9 years), height (178 ± 5.1 cm), mass (72 ± 8.2 kg), maximum heart rate (189 ± 2.6 bpm) and heart rate at rest (58.1 ± 7.1 bpm) were collected from the players. Heart rate at rest (HRrest) was measured whilst lying supine for 15 min and maximum heart rate (HRmax) was determined during a progressive, continuous and maximum test running around a track (Léger-Boucher, 1980). 2.2 Experimental design Players were asked to perform a forehand drive as precise to attain a target (a circle of 21 cm of diameter) placed in the opponent half-table and as fast to pass over a 75 cm high barrier placed at 2.50 m from the table. Balls were sent by a trainer following 9 different experimental conditions: 3 displacement conditions, each performed at 3 different ball ejection rate (60, 72 or 80 balls.min-1). The trainer followed the ejection rhythm through a metronome earphone. Each condition lasted 1 minute. The 3 displacement conditions were: (i) task without displacement (WD), (ii) task with a predictable displacement (PD) and (iii) with an unpredictable displacement (UD). In WD condition balls were sent only on the right side of the player; in PD condition balls were sent alternately on the right and middle hand side of the player’s half court, in order to lead to lateral footwork; in UD balls were randomly sent on the right and middle hand side of the player’s half court. 2.3 Materials Heart rate (HR) was monitored during exercise every 5 seconds using a heart rate monitor (Accurex plus, Polar, Kempele, Finland) including a polar coded transmitter, an elastic belt and a receiver wristband. A Sony digital camcorder was employed to film the players and to evaluate their performance “off-line”. 2.4 Procedures The 9 experimental conditions have been tested before (pre-test) and after (post-test) a training period of 3 weeks, made up by 9 sessions of 1:15 hours each (Table 1).

Table 1: Temporal structure of the experimental procedure including a pre-test and a post-test sessions. During these sessions participants were evaluated in all the 9 experimental conditions. Between the two evaluation sessions 9 training sessions took place: general description of the trainer’s interventions during the training sessions is reported.

2.5 Data analysis Heart rate (HR) and performance were recorded during exercises. HR data were analyzed using the Training Advisor Polar software. The maximal HR obtained during exercise was expressed in absolute terms (bpm) and relatively to HRmax and to HRrest (Karvonen et al., 1957/1983; Hiillorskorpi et al., 2003), which allow to determine the relative effort intensity. HRR = (HRexo-HRrest)/(HRmax-HRrest) (1) To evaluate performance, we retained 6 outputs classification: (i) the target attained and the barrier passed (T+B), (ii) only the target (T) or (iii) only the barrier (B) attained, (iv) the ball hit the opponent table neither attaining the target nor passing the barrier (O), (v) the ball hit by the player without reaching the opponent half-table (N), and (vi) the ball not hit (NT). Using these 6 performance outputs, a global score of the performance was calculated: The score was expressed in percentage, relatively to the total attainable points for a subject, in order to compared conditions having different numbers of ejected balls. Three-way repeated measures ANOVA were performed on HRR and on performance score to analyze and quantify differences between the 9 experimental conditions and to evaluate the improvements due to the specific training period. Statistical significance was set at P < 0.05. All results are reported as mean ± standard deviation (SD).

Figure 1a: Performance in the 9 experimental conditions. 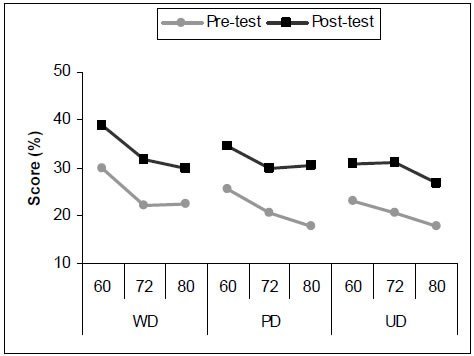 Figure 1b: HRR in the 9 experimental conditions. 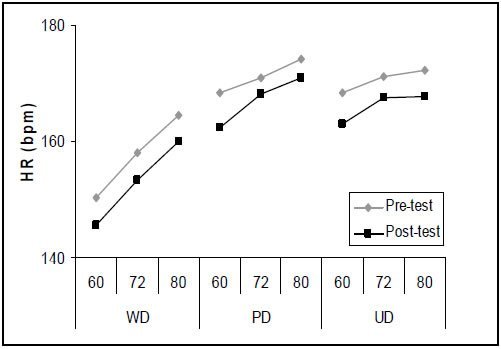 3.2 Heart rate The analysis of HRR showed a significant effect of the training (F1,10 = 7.79, p<0.05): HRR passed from 167 bpm during the pre test to 162 bpm during the post test. Training results in a slight decrease of HRR in all the experimental conditions (figure 1b). Another parameter affecting HRR was the difficulty of the task (F2,20 = 45.82, p<0.001). Post-hoc analyses pointed out a significant difference between WD and the two other conditions (p<0.05) with significantly lower HRR for the first condition, while no difference was revealed between the two kinds of displacements. Ejection Rate also influenced HRR (F2,20 = 7.37, p<0.05) showing an increase of HRR with the increase of ball’s ejection rate.

The main goal of our study was to analyse the efficiency of a table tennis player both from a physiological and a motor control point of view. In this kind of activity, considered as an “non optimal solicitation” activity (Durand, 1992), efficiency critically depends on the conflict between efficacy (i.e. performance) and movement economy (energetic cost). Our analysis was based on the evolution of two major indicators of this conflict (HRR and score) due to training and concomitantly to different level of difficulty (kind of displacement required) and intensity (balls ejection rate) of the task. The basic hypotheses that lead this study was that training would induce an improvement of players’ efficiency (better performance with lower energy expenditure) and that this improvement would depend on task complexity (Durand, 1992). After the 9 training sessions, we observed an increase in performance, with the score passing from 22% to 32%. This result support the first hypothesis, stating that learning leads to an increase in efficacy (Schmidt, 1988). This result suggests that a better organisation of movement patterns took place during training: the high movement variability of novices, made up essentially by a lower motor control organisation (Jospin & Fayt, 2004), gradually evolved towards highly reproducible movements (Schmidt, 1982; Magill, 2004). Moreover, an improvement in displacements management may play a primary role in improving efficacy, avoiding postural misplacements and incomplete and late information pick up (Abernethy, 1993; Ripoll, 1989), and allowing an optimal placement of players relatively to the table and balls (Arzel, 1994). Generally speaking, an increase in performance, due to a new movement organization, should lead to an optimization in terms of energy expenditure, induced by a more adapted muscular recruitment (Durand, 1992). The decrease in HRR that we evidenced in our study denotes that this change took place IV Congreso Mundial de Ciencia y Deportes de Raqueta during training, allowing players to reduce their energetic involvement (Billat, 1998, Willmore & Costill, 1998). In PD and UD conditions players evolved from an ineffective mobility, essentially made up by disorganized movements and useless muscular contractions, to a specifically organized mobility, allowing an adapted muscular recruitment. The more efficient “anticipation” capability of players, achieved through a better analysis and understanding of balls trajectories, allow them to have more versatile and controlled movements (Abernethy, 1994; Schmidt, 1982. Finally, the results obtained support the second hypothesis we formulated (i.e. improvement in efficiency depends on task complexity). The increasing in task constraints due to displacements and/or to balls ejection rate seems inversely correlated with efficiency, both in terms of performance and of HRR. This result follows results found in previous studies on efficacy (Fitts, 1954, Keele, 1968; Schmidt, 1982 and energetic cost (Durand, 1992).

Results presented in this work evidenced that training allows table tennis players to improve their ability through an increasing motor efficiency. This efficiency is made up both by a better efficacy and by a decreasing in the energetic involvement (Guthrie, 1935). This “economic” parameter could be retained to precisely characterize motor abilities (Sparrow & Newell, 1998).